Royal Caribbean’s Entertainment team first approached EPS in early 2017 with a design challenge for their new production in development: “They wanted to create a movable model of the original Wright brothers’ airplane… and they wanted it to fly,” said EPS Vice President, Joe Champelli. That project grew into “Flight: Dare to Dream,” a production that chronicles the evolution of air travel and space exploration, planned as one of the entertainment options aboard the cruise line’s newest ship at the time, Symphony of the Seas. With musical numbers that encapsulate some of the pivotal moments in aeronautics, the story is told in reverse starting with a futuristic leisure voyage to Mars and culminating with the historic first flight at Kitty Hawk in 1903.

EPS felt the pressure to deliver the show’s climactic wow-factor, and their team quickly got to work on the design and build of a realistic airplane that could be flown with and by a performer.

"They wanted to create a movable model of the original Wright brothers’ airplane... and they wanted it to fly."

Due to the size limitations of working within the ship’s main theater, the scenic designers had the challenge of creating a replica of the original plane at a reduced scale. That did not make it any less impressive. Boasting a wingspan of 22 feet, the finished flyer rolls, pitches, and yaws as it flies high over the audience. The actor “flying” the plane controls all those motions while acting and singing the chorus of the showstopping finale, leaving spectators in awe.

To accomplish this high-flying feat, EPS collaborated alongside Royal Caribbean’s theatrical design consultants Gerry Hariton and Vicki Baral of DesignDuo on early models. They studied the Wright brothers’ flying machine to get an accurate, though slightly altered concept featuring a seated pilot rather than one who was lying down. EPS took advantage of this opportunity by placing the performer at the center of gravity and at the center of the flyer’s pitch and roll axes. To achieve this, the plane’s main fuselage was modeled around the motion of a gyroscope, allowing the actor to easily create a smooth, fluid movement of the wings while performing.

The original concept included automating all axes of motion on the Wright flyer. During the risk assessment, the project team brought up concerns about what would happen if there were a failure or power loss in the system. To mitigate that risk, the plane would require a manual backup system. It was the EPS design team that introduced the idea of just manually operating the plane, which solved the need for bulky and costly controls and automation. That collaborative design decision helped the production reach its goals more quickly while achieving the vision of the theatrical directors. What resulted is a scenic piece that is part ride-on prop and part wearable costume. The performer manages the rotation with hand-held controls while simultaneously manipulating the pitch and roll by leaning side to side and forward and backward.

Keeping the total combined weight of the apparatus and the performer below a certain weight limit was EPS’s biggest concern. Understanding necessary constraints from previously managing dozens of performer flying systems, EPS challenged itself to set the cap at 500 lbs. (allowing 175 lbs. for the performer and 325 lbs. for the flyer). Anything beyond that threshold would have required a redesign of the flying system and re-engineering of the structure of the ship’s theater, which was already reinforced to handle the load. The team worked alongside its longtime collaborative partner, Flying by Foy, to specify the four-point 3D flying system that would hoist the plane up and over the audience. The EPS and Foy teams went above the design factors called for in the ANSI E1.43 performer flying standard and engineered the system at a design factor of 12:1. 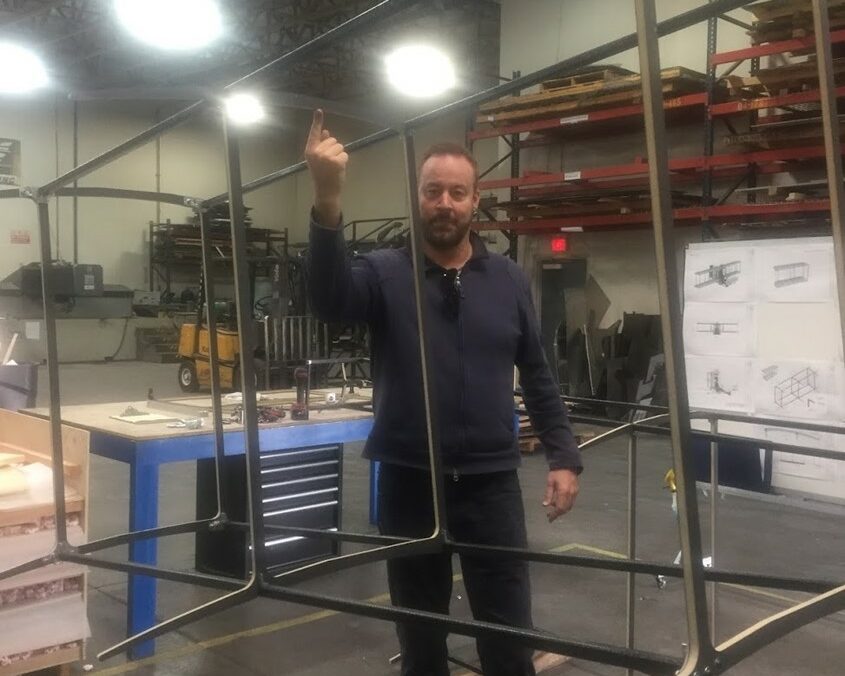 Holding the flyer’s wing with a finger, Royal Caribbean’s SVP of Entertainment Nick Weir was the creative visionary behind Flight and the climactic scene of Orville Wright soaring over the audience. 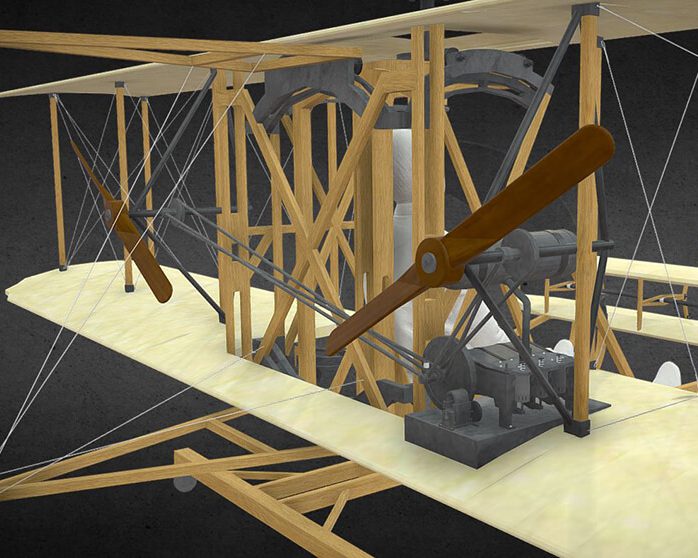 EPS developed the mechanical motion of the Wright flyer to be controlled by the performer so that it is part ride-on prop and part wearable costume.

Once the concept of the Wright flyer was finalized, EPS worked with AMC Fabrication to select and test different materials for constructing the plane to the correct weight specifications and aesthetic design. Initial engineering models revealed that an all-aluminum frame would exceed the target weight limits, so the team explored working with carbon fiber foam-core sheets and carbon fiber tubing for the wing structure while using structural aluminum for the core and main support of the plane. Though carbon fiber was not a typical material used in the shop, AMC along with EPS’ designers took on the complex task of working with the ultra-light composite. Special bonding, fastening, and machining methods were used for the flyer’s main wing structure. With the addition of a vinyl wrap, the project team recreated the realistic look of wood-grain finish.

For the wings of the flyer, EPS had to strike a balance between the rigid structure of the aluminum and the true-to-life appearance of canvas wings. Attempting to create a stretched fabric cover that wouldn’t droop in the middle and provide the right stability, the designers took inspiration from the original Wright brothers’ craft: stringing fine wire (or in this case, paracord) between the struts. The truss pattern of the paracord gave the nearly 10-foot-long wings extra stability, not only during performances, but also for disassembly, storage, and transport.

After 11 months of development and fabrication, the Wright flyer undeniably impressed the project team during its test runs. Flying by Foy set up a scaled version of the 3D flying system inside their rehearsal studio, offering the Royal Caribbean directors a sneak peek prior to shipping.

EPS designed three custom road cases for the fuselage and the two wings. The road cases were not only used for shipping, but they also accommodated the limited backstage storage conditions. The flyer was shipped to Civitavecchia, Italy where it was loaded onboard Symphony of the Seas and into its new home in the Royal Theater. 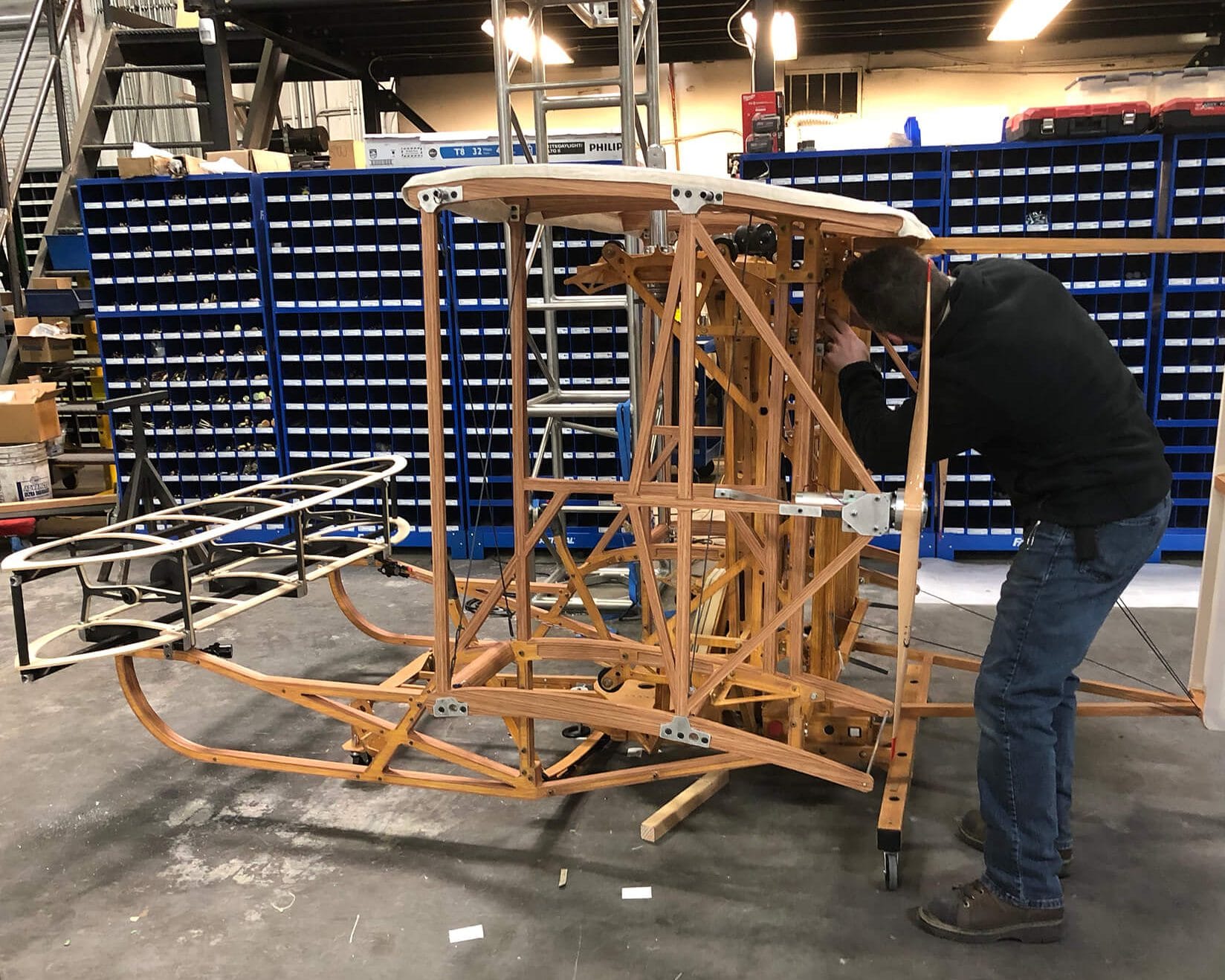 Together with AMC Fabrication, EPS crafted the framework of the plane from carbon fiber tubing for a lightweight yet robust structure. 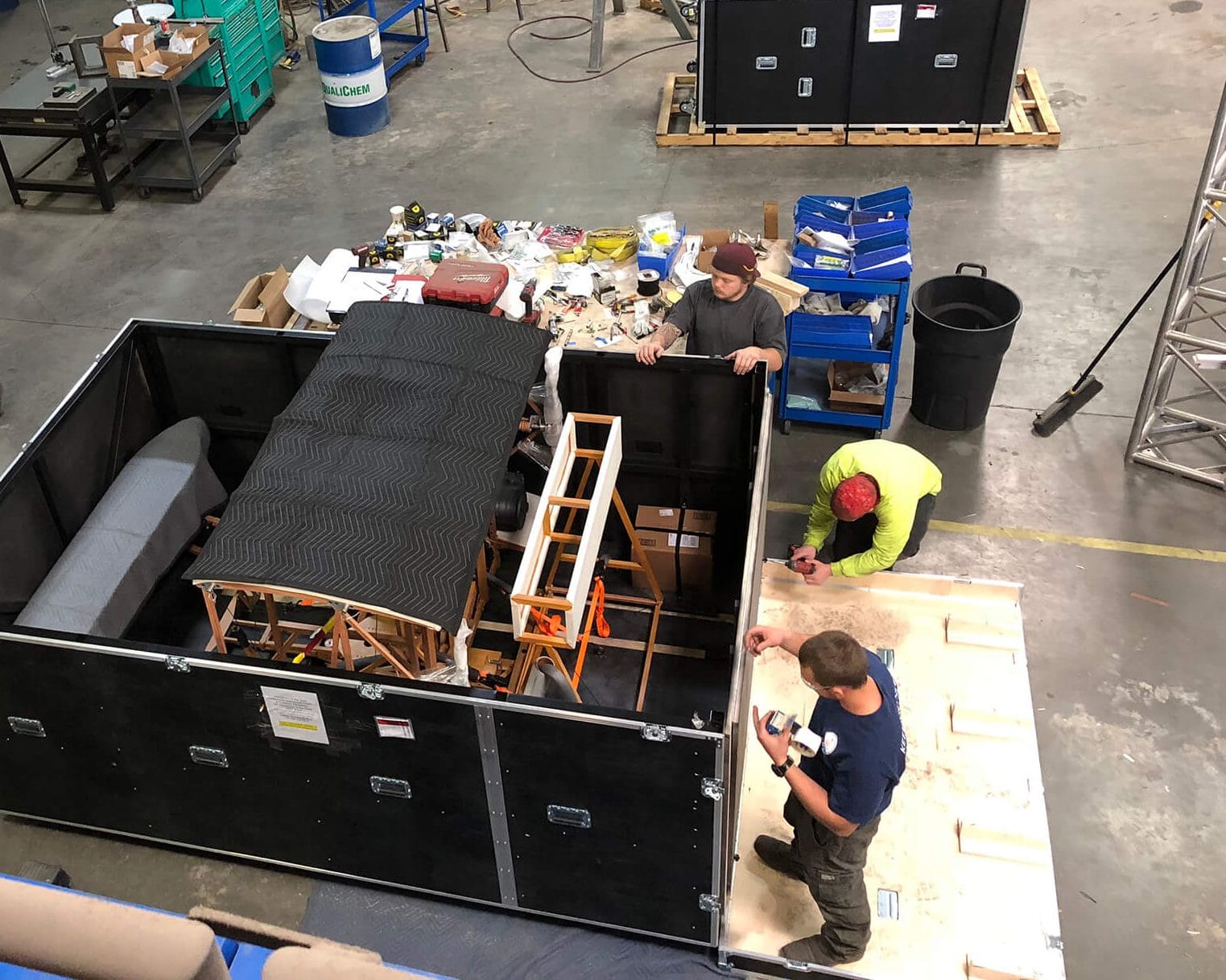 With as much care and concern that went into developing the Wright Flyer, the EPS team finished test runs and shipped it out to Symphony of the Seas.

Due to the simplicity of the design, the performers’ intuition, and the in-depth planning of the production team, minimal technical rehearsals were required to effectively integrate the Wright Flyer once the plane was installed in the theater. The three custom storage containers fit in their own spaces backstage, and the case holding the fuselage doubles as a set piece in another exciting moment in the show: the actors climb on the top of the case before stepping inside a detailed replica of the International Space Station.

As the flyer prepares to make its appearance during each performance, three technicians assemble the plane backstage ten minutes prior to the grand finale number. Then the rigging specialist and the performer inspect the connections and components. Once rolled onstage, trained riggers in costume connect the flyer to the Foy flying system and ensure Orville Wright’s safety harness is properly clipped into the fuselage before making his dramatic flight.

Since its debut in Europe in May 2018 and its introduction stateside in November 2018, the replica plane has already seen more flights than all the Wright brothers’ tests combined. The plane goes through multiple performances during weeklong sailings, so EPS completes quarterly maintenance and inspections on the mechanics and structure of the flyer. The robust design of the Wright flyer was engineered to last 10 years; the captivating music, impressive set design, and technical achievements of Flight: Dare to Dream will likely live on for much longer. 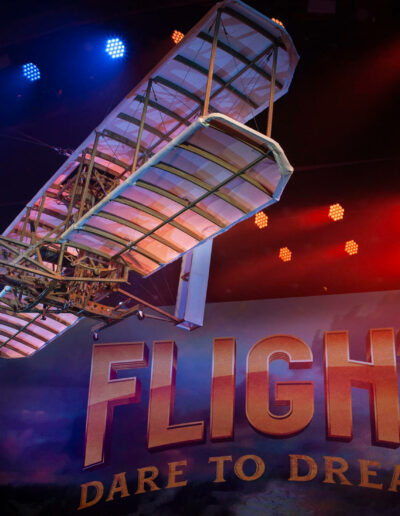 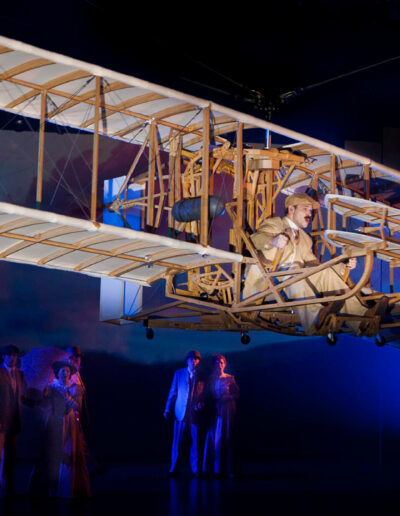 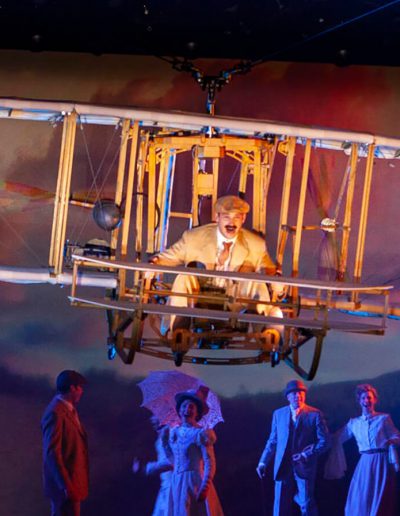 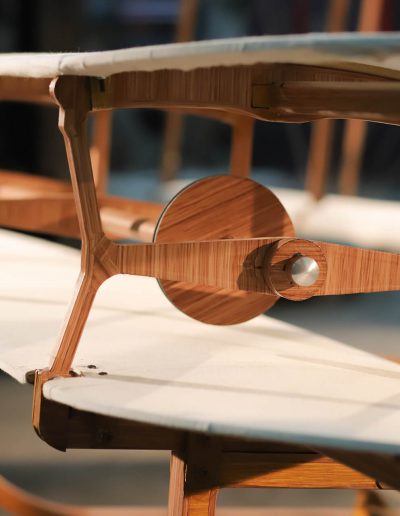 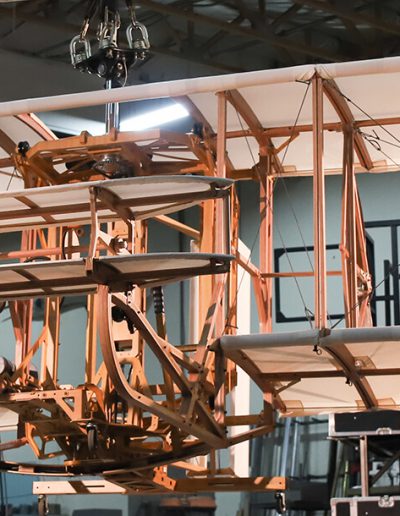 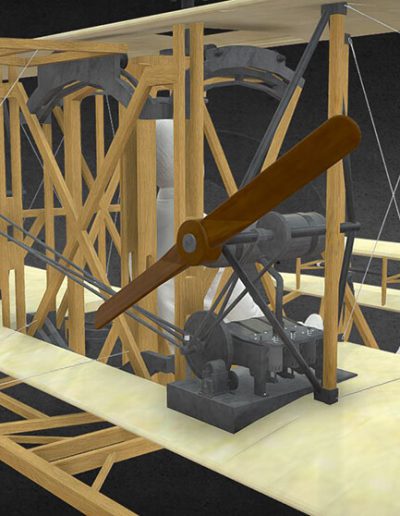 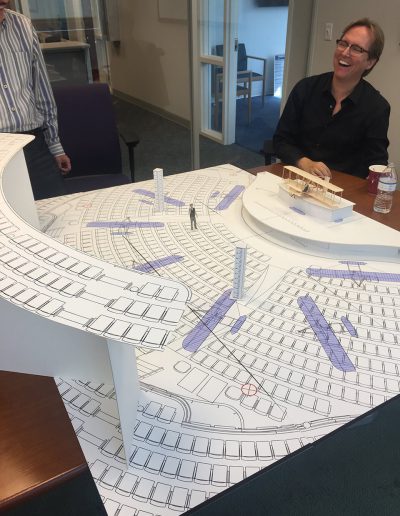 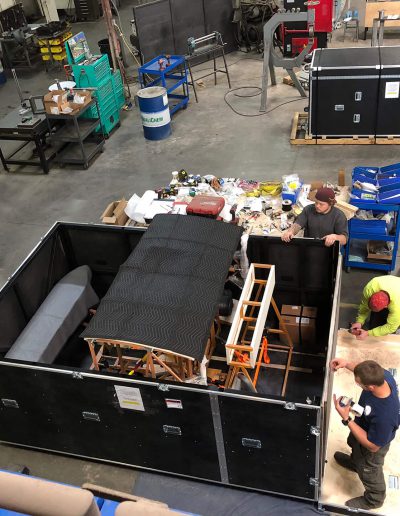 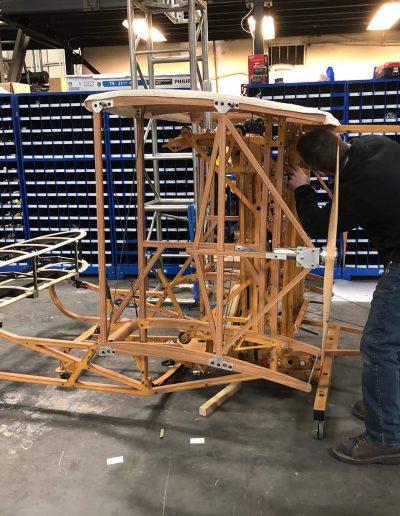 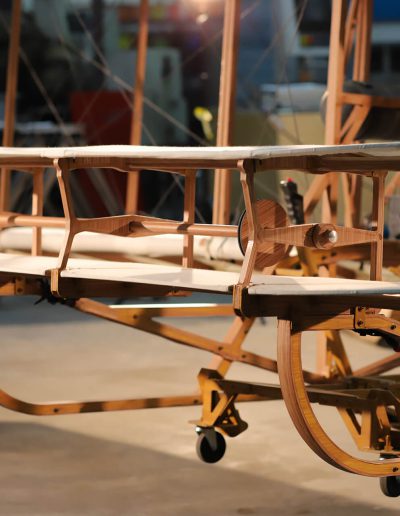