When the world-renowned acrobatic production company Cirque du Soleil set out to create an all-new show spectacular focused on stunt performances and choreographed fights, producers planned to pack a punch with some extra muscle. That meant staging a scene that would incorporate all the action of a car chase, live on stage. “We had to choose between building an acrobatic apparatus and making it look like a car, or turning a car into an acrobatic apparatus,” said EPS Founder/President, Steven Michelman.

EPS was hired in May of 2019 to create the stunt car in time for the fall premiere of Cirque’s show, R.U.N., headlining at the Luxor Hotel in Las Vegas. Used in the show for a pivotal sequence in which the protagonist character continues on an action-packed pursuit, the car served as much more than a scenic prop. With video integration, strobing lights, and performers jumping on and off all while the car rotated at 7.5 RPM, the car became a focal element in driving the story.

In the short timeframe to design and fabricate the stunt car, EPS went to work on this exciting project.

R.U.N. made use of video screens to help create a dynamic background, bringing to the stage the look and feel of blockbuster action movies or comic-book graphic novels. In the scene with the car, the stage’s wide video screen shows the road rushing by, helping to simulate the car’s speed and its numerous choreographed turns. The screens allowed the audience to see the emotions of the actors in the car through a direct video feed from cameras mounted inside several locations in the car, including the sideview mirror.

EPS had designed a rolling unit capable of 1,080 degrees of rotation to spin the stunt car as the “driver” made fast turns throughout the getaway scene. The EPS onboard industrial controls, provided by AHI Automation, were designed to integrate seamlessly with the theater’s existing control system allowing the programmers to syncronize the movements of the car with those in the video.  With controls for automation, lighting and video in both the rotating car and the base, EPS had a challenge with cable management.   EPS needed to ensure that the live camera feed, which was sent over fiberoptic cable, would maintain its signal to the video screens from the base to the rotating car. The 7.5 RPM max speed of the car plus the limited space for a cable chain solution compounded the challenge.

Due to project timeline, finding a slip ring or slip rings that could manage high voltage motor power, fiberoptics and ethernet was not an option. The EPS team was able to integrate an innovative cable carrier solution from igus that allowed for even more than the 1,080 degrees of rotation desired. With this arrangement, they ensured that the video, power, and controls would remain connected without signal loss. All of the vehicle’s controls were fitted under the hollowed-out hood, running the flashing lights and spin of the tires in sync with the video screen and original composed music. The entire stunt car system was comprised of four different axes of motion: the two front tires that spun individually on two separate motors, the back tires that were controlled by another motor, and the rotation of the car on its base.

The production team for R.U.N. developed a unique stage system that would allow the performers to interact with and match the movement of the stunt car. On one side, a cushioned mat protected the performers who were pushed off of the car in the tense fight sequence. The other side of the stage featured a multi-speed treadmill that ran underfoot as actors jogged after the lead character making his getaway in the car. When motocross bikes joined the pursuit, the belt sped up to give the illusion of a high-speed chase. 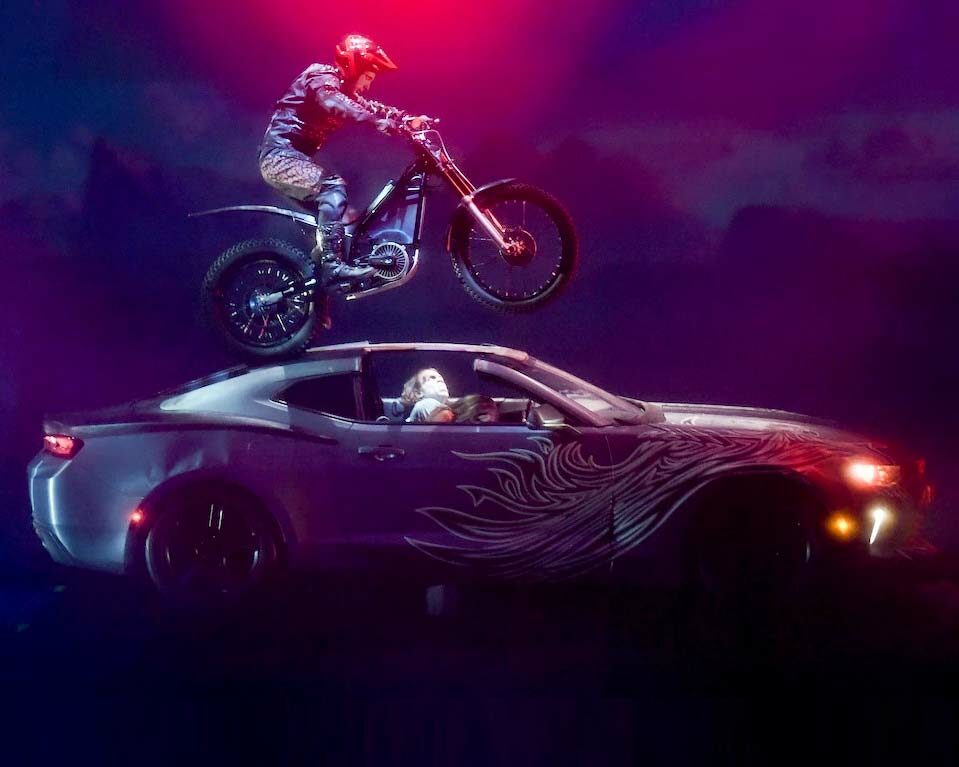 R.U.N.’s dynamic video screen background helped further simulate the speed of the car as its wheels spun and turned.

The mechanical design for the base of the car allowed for 1,080 degrees of rotation.

In looking at both the deliverable date and the budget, EPS quickly eliminated any plans for fabricating a fiberglass shell of a vehicle. It was simply more efficient to buy a car and strip it down to the frame. Because of the amount of contact with the body of the car, certain areas needed to be reinforced where actors would be standing and holding on, as well as the motocross bikes that would drive up over the hood and down its center.

EPS worked alongside AMC Fabrication, and together they transformed the 2016 Chevy Camaro into a unique custom vehicle including bracing the frame where the car would bear the most force.  Working with the Cirque du Soleil design team for the car’s specific finishes, the team opted to create a stripe down the center made of Rhino Lining, the rugged coating primarily used for truck bed liners. The gritty surface not only helped hide the additional reinforcement required, it also produced a safer surface for the stunt team to choreograph the action of the performers and for the motocross bikers who rode over the top of the car.

Once the modifications were completed and before final finishes, EPS invited the stunt team to the AMC shop to take a test drive of the apparatus. After riding the motorcycle over it and jumping, rolling and tumbling, they determined a few more areas that needed reinforcing. With these modifications, the car proved it could withstand the constant thrashing that each performance would deliver, and EPS coordinated with the Cirque production team to finish the car’s thematic design. EPS wrapped the car and added a bold custom decal that related to the show’s plotline.

The weight of the car was always a concern. EPS predicted the car would weigh close to 9,000 lbs., which was not acceptable for the project. During design and fabrication, AMC and EPS worked tirelessly to make the car as light as possible. When complete, the car weighed in at 7,000 pounds. Although lighter than anticipated, this still presented a challenge for the crew moving it on and off stage. To help manage the movement of the unit and distribute the load on the stage floor, the base required twenty triple swivel air casters. The crew, with some assistance from an electric load pusher, was able to move the unit on and off stage during the show. 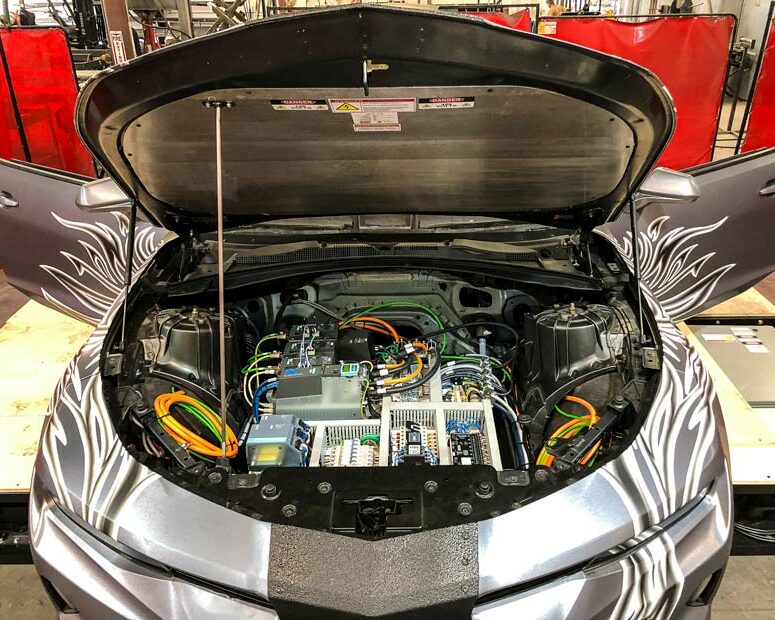 The hollowed-out engine compartment of the stunt car fit all of the controls for the motors, lights, and video feeds. 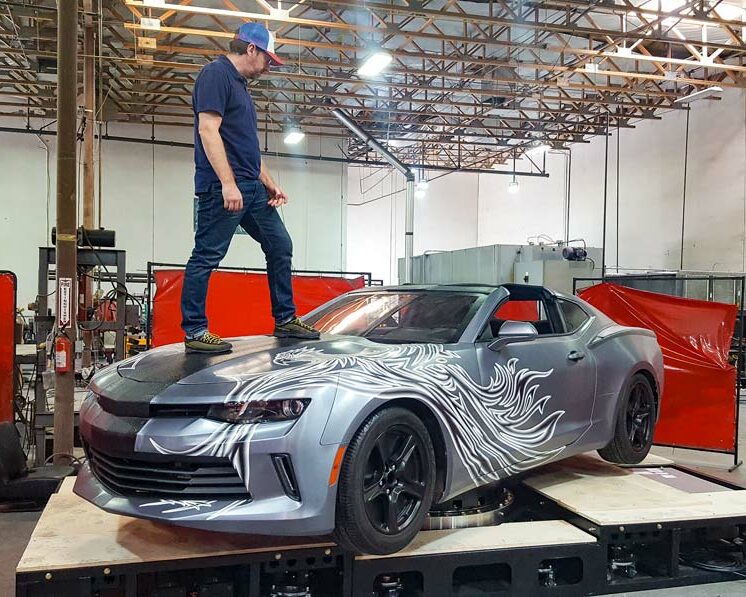 EPS tested the stunt car to ensure its reinforced body could withstand the constant thrashing of every performance.

As a memorable act for Cirque du Soleil’s Live-Action Thriller R.U.N., the stunt car highlighted an adrenaline-fueled stage show unlike anything seen before in Las Vegas. Though the action sequence only lasted for 7 minutes, the impressive visual scene became one of the main promotional images associated with the show.

The realistic motion of the car and its integration with the video and music made this a one-of-a-kind audience experience. With EPS lending its technical expertise, R.U.N. successfully achieved something that Cirque du Soleil had never before attempted. 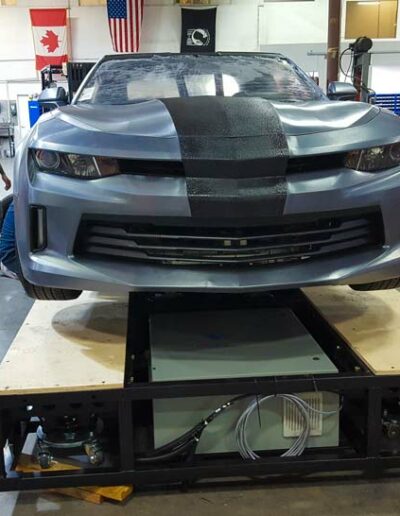 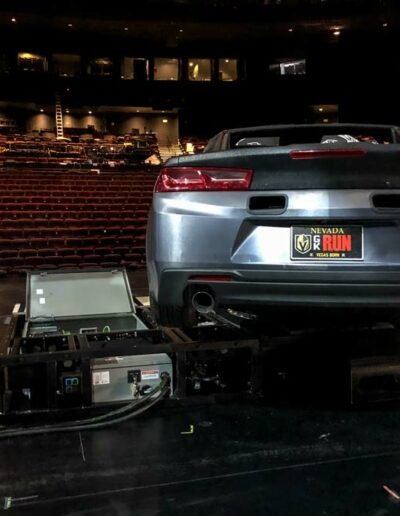 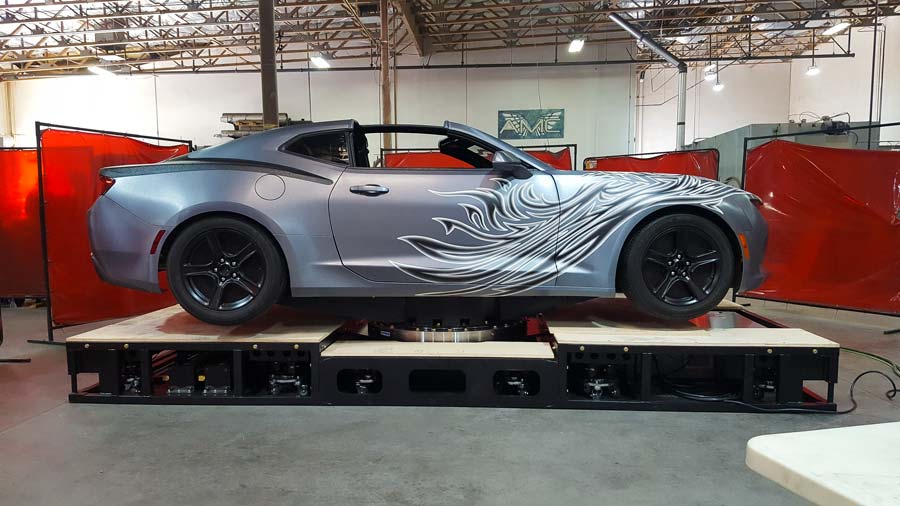 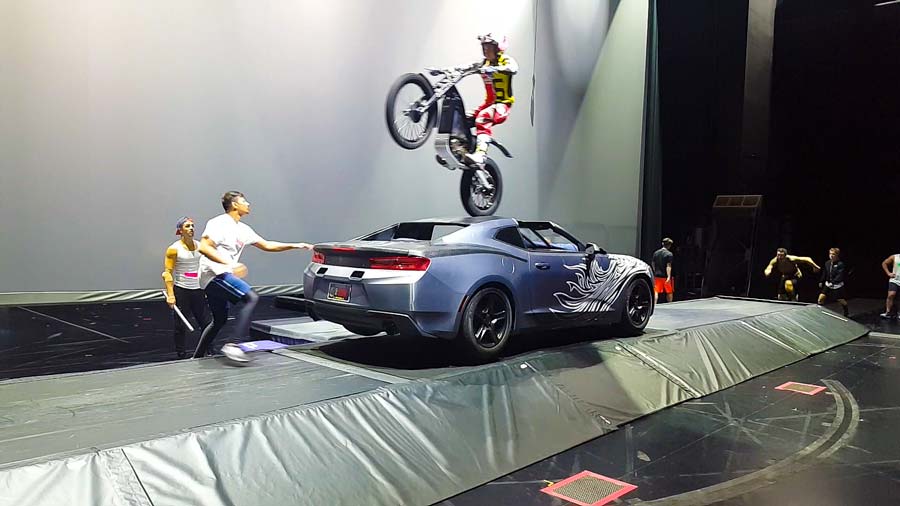 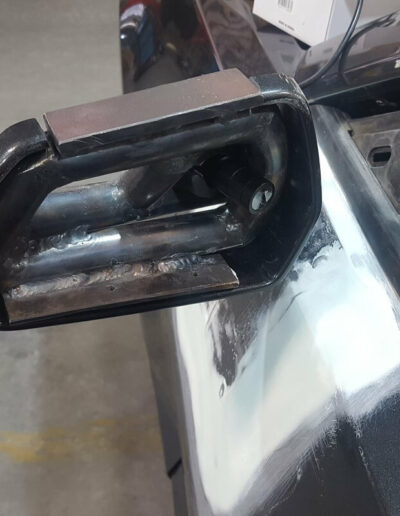 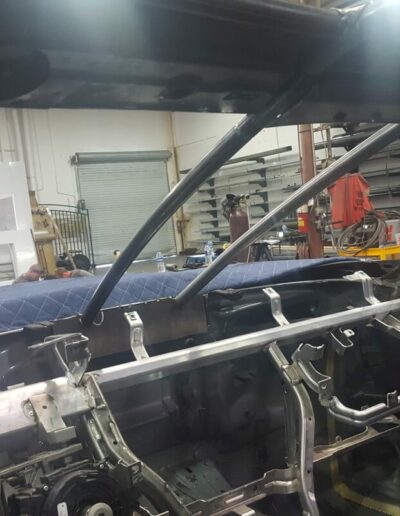 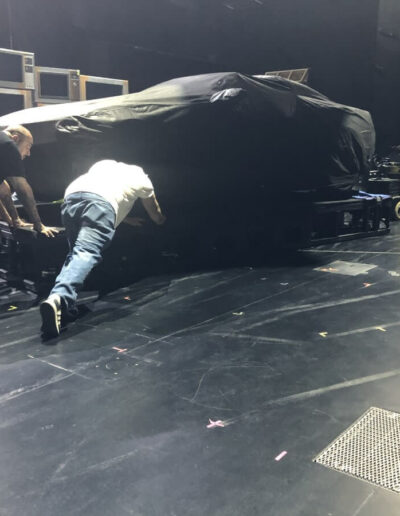