Royal Caribbean’s AquaTheater Show, Aqua80, onboard Oasis of the Seas

In 2019, Royal Caribbean was in the midst of a $165 million revitalization of its original groundbreaking ship, Oasis of the Seas, and the company’s Entertainment division was planning an exciting new show for its AquaTheater. Incorporating high divers, aerial acrobats, slackline performers, and synchronized swimmers, AquaTheater productions have continued to raise the bar as Royal Caribbean unveils a new iteration for every Oasis-class ship. For the makeover of Oasis, the Entertainment producers approached EPS with a concept for a unique moving prop unlike anything ever created. “They had an idea to put a new twist on the Catherine Wheel Firework… but instead of creating spinning sparks, this one-of-a-kind special effect would spray water,” said EPS Founder/President, Steven Michelman.

Inspired by the Catherine Wheel—or pinwheel—firework, the team at Royal Caribbean led by Senior Vice President Nick Weir wanted to achieve a hypnotizing, fiery spectacle. However, to ensure the safety of the performers and audience, he envisioned illuminated water shooting in that same circular motion. With the 3D flying system already in use for other parts of the show, the team also requested that this new water-spraying prop fly above the audience from the back of the AquaTheater to the stage.

Presented with these unique challenges, EPS began its problem-solving process to make Royal Caribbean’s ideas a reality with a never-before-seen, and now patent-pending, Aquatic Catherine Wheel.

"They had an idea to put a new twist on the Catherine Wheel Firework… but instead of creating spinning sparks, this one-of-a-kind special effect would spray water."

First, the wheel needed to adhere to a certain weight limit so that the flying rig could support it as it soared overhead. Second, because it was a moving prop and not a stationary set piece, the entire unit needed to be self-contained. Ensuring the load stayed under 400 pounds, the EPS team designed and evaluated the components of the wireless internal system to fit within a lightweight aluminum frame. Its reservoir tank holding 16 gallons of water weighed 110 pounds by itself, and the team still had to make room for the additional elements that would generate the Catherine Wheel effect using strobing lights and water.

EPS recruited frequent collaborator, Dan Comins of Special Services Department, to help develop a system that would achieve the unique water effect. Dan designed the onboard system which powered the wheel’s 26 LED spotlights, strobes and the electronic controls including the wireless DMX system that would allow the Aqua80’s production team to integrate the lighting sequencing into the rest of the show.

For the spinning water effect, EPS needed to create a system that would be different from a traditional Catherine Wheel firework that relies on the force of ignition to create the rotation. The project team developed a design using an electric motor in the center to spin the water nozzles. An air powered pump provided the stream of water to each nozzle. To enhance the Aquatic Catherine Wheel’s illumination, the project team positioned rings of mist sprays that would refract the colored lights for a dramatic look—much like the smoke from the firework version—during the AquaTheater’s nighttime show.

Another consideration in the design that EPS provided was a separate wireless failsafe trigger. To allow the water to flow, the system required a technician offstage to press and hold a button throughout the cue. Since the Catherine Wheel’s programming is triggered by timecode, but the Flying system supporting it is not, there is a potential to have the Aquatic Catherine Wheel out of position when the water starts flowing. By eliminating that potential scenario with an enable button, EPS ensured the safety—and comfort—of a dry audience. 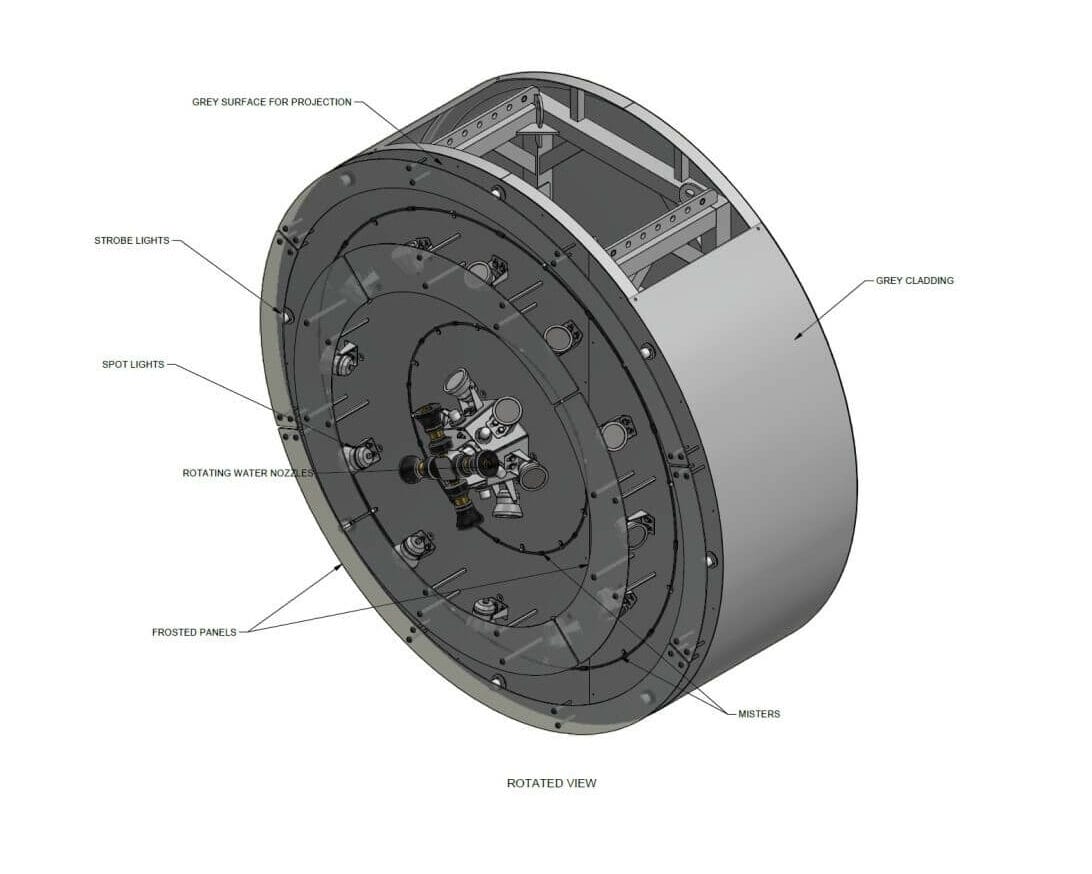 EPS designed every component to fit within the Aquatic Catherine Wheel’s 400-pound limit. 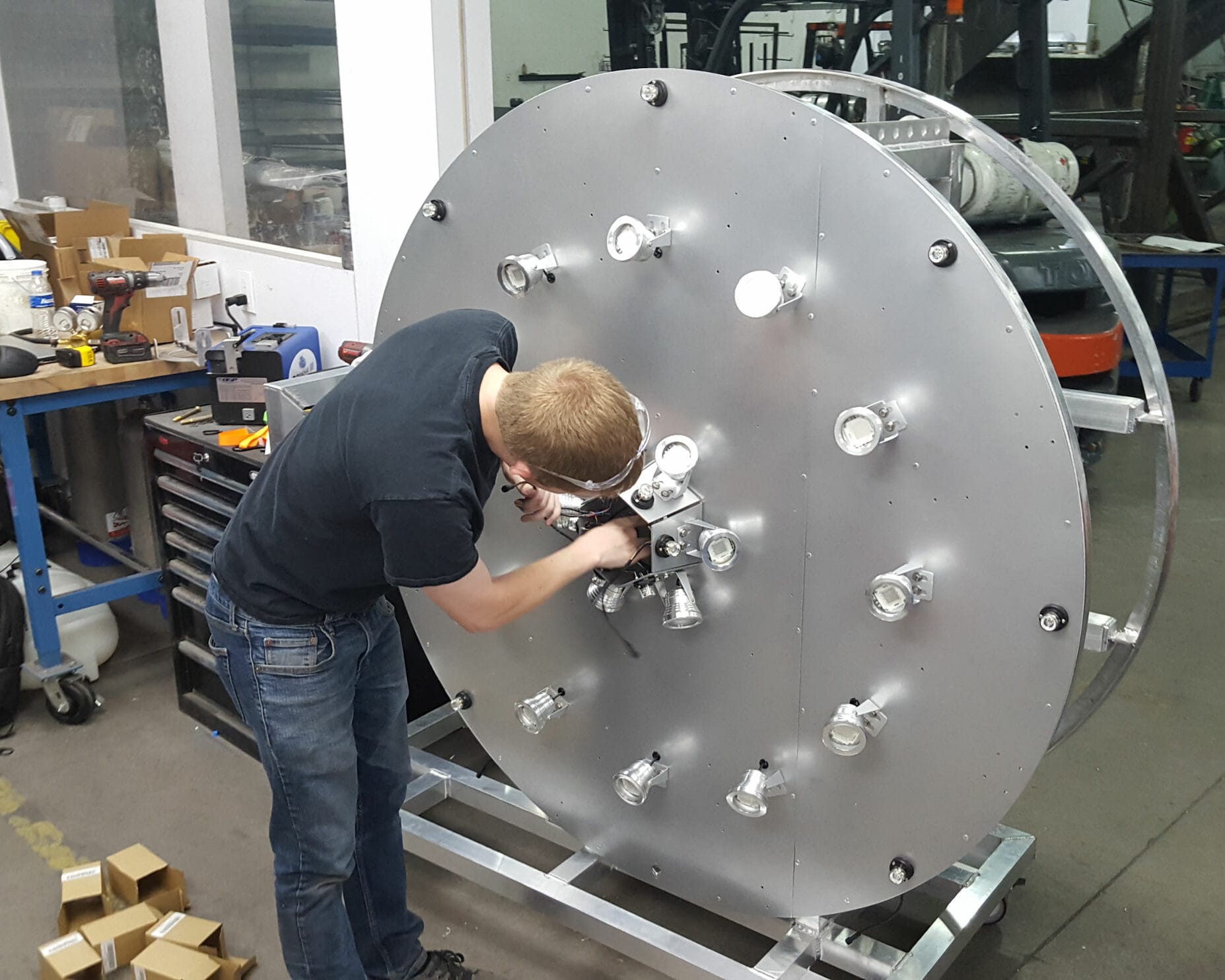 A circular array of 26 LED spotlights and strobe lights add to the spinning effect of the Aquatic Catherine Wheel.

When it came time to transform the Aquatic Catherine Wheel’s design into reality, EPS partnered with AMC Fabrication to build the 5-foot circular frame and mechanical components. Using aluminum to keep within the weight limits, AMC coated the frame and cladding to protect the metal from its exposure to the outside ocean air.

With the tanks, battery, motor, electrical boxes, lights, and nozzles fit into place, EPS began product testing. The project team worked with the Royal Caribbean creative producers to evaluate every option, from different lighting colors and patterns to the volume of water and distance it would spray. The robust design also proved itself stable when hoisted on rigging lines; the spray of the water didn’t cause the wheel to sway.

After implementing all final modifications, the Aquatic Catherine Wheel was shipped out to Oasis of the Seas in its home port of Miami, Florida. Thanks to its self-contained design, the crate was hoisted onto the ship and easily carted up into its position at the back of the AquaTheater where it was ready for action. EPS worked with the team on installation, fitting it onto the flying rig system developed by Flying By Foy and training the crew on operation. 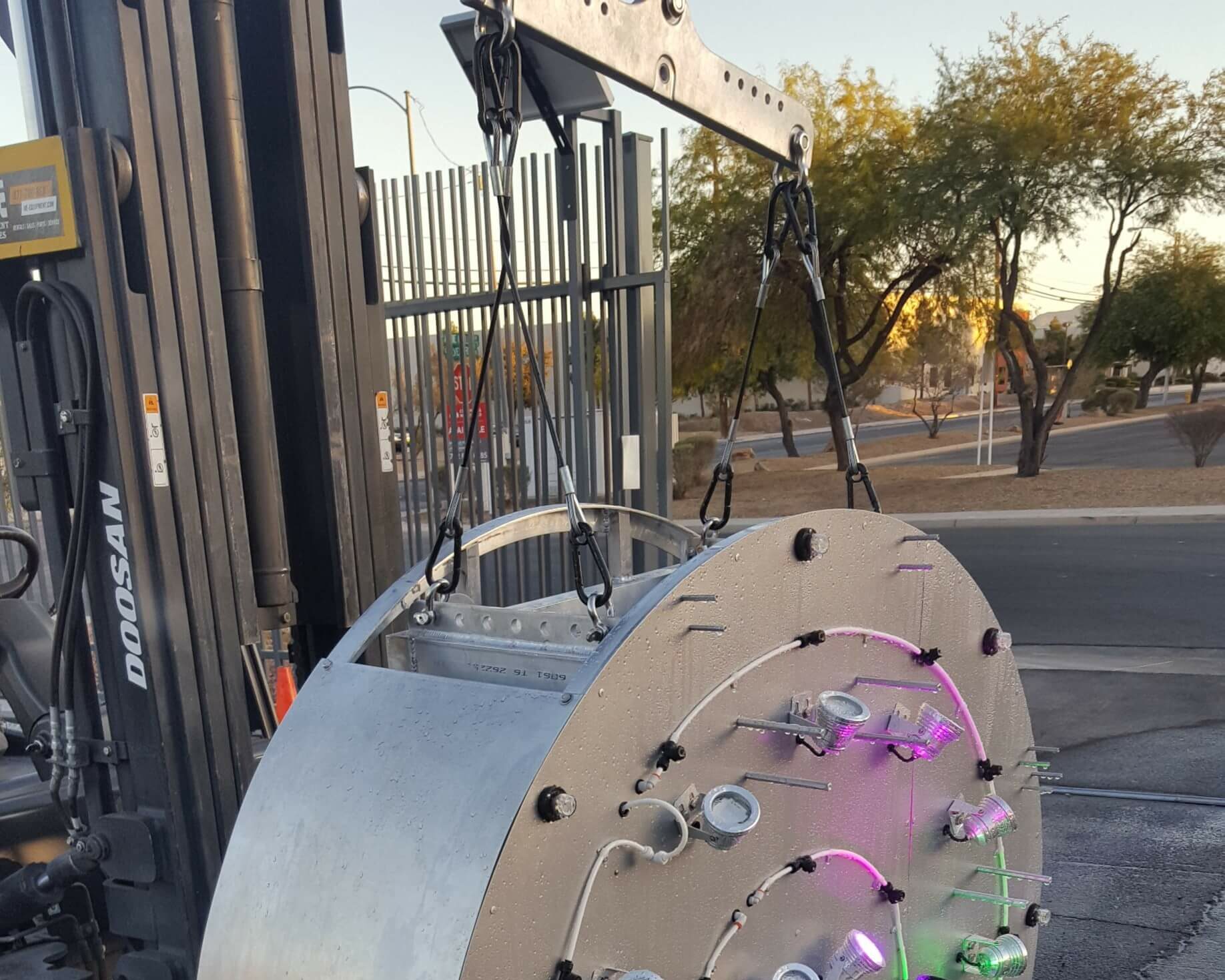 EPS tested the color effects and the rigging lines attached to a spreader bar. 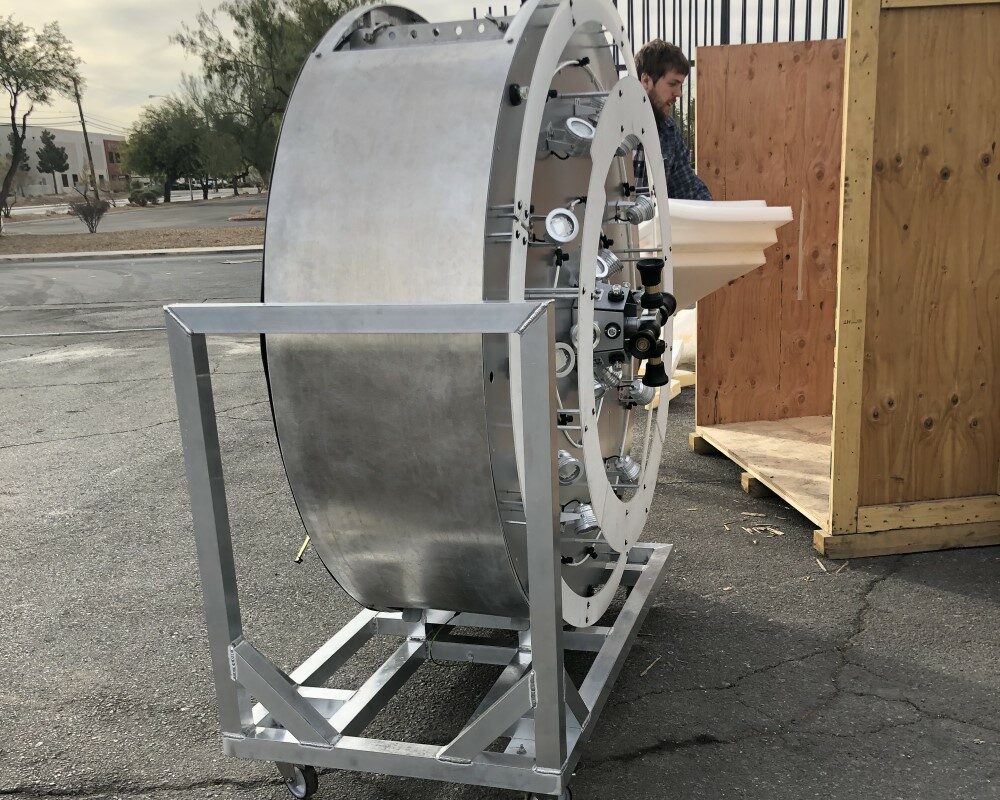 After tweaking every element of the effect—color, strobes, rotation, and more—EPS prepared the Aquatic Catherine Wheel for delivery.

When Aqua80 premiered on the first sailing of Oasis of the Seas in late November 2019, the Aquatic Catherine Wheel made its debut during the showstopping finale. Once again, Royal Caribbean Entertainment produced an amazing stage spectacular incorporating fantastic feats and never-before-seen special effects. The Aquatic Catherine Wheel was so special, in fact, that the Royal Caribbean project team filed a patent application for its innovative design in November 2019.

Today, along with other elements onboard Royal Caribbean ships, EPS provides scheduled inspection and maintenance for the Aquatic Catherine Wheel. 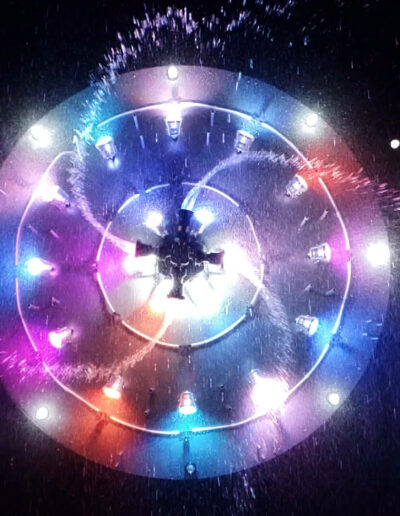 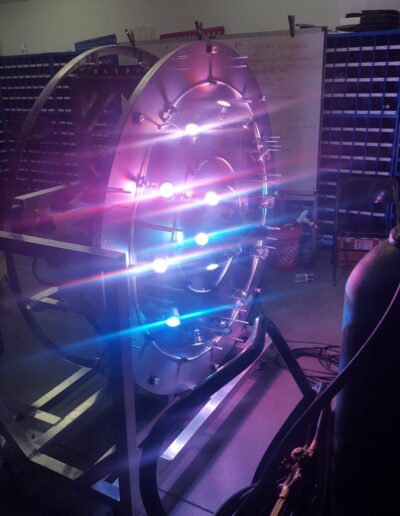 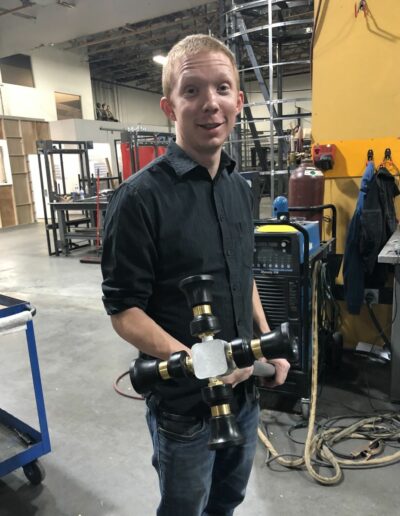 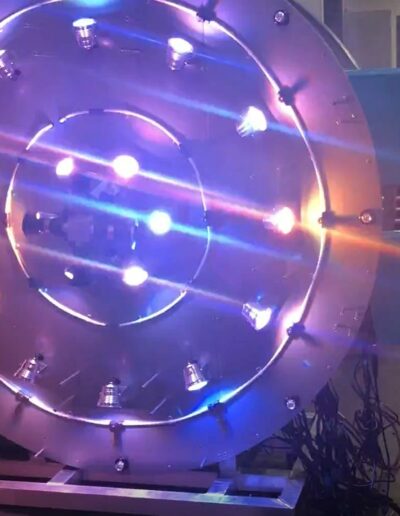